While the Gemstone Gang was finishing out their growing in the Big Kids Room, we got a call about a couple of kittens who needed some extra care. BeeBee’s House specializes in special needs kittens, and the Isolation Room was open, so we took in a couple of 5-6 week old boys who were having some gastrointestinal problems. They had a sister as well who was staying at the vet’s office, in much worse condition than they were. (Sadly, she passed away before she could foster here at BeeBee’s House.)

Wilbur and Orville may have been born in the same area, but it’s doubtful they were true siblings. Brothers from another mother, perhaps, but there was nothing remotely similar about them. Wilbur was big and fluffy while Orville was scrawny and tabby. (And oh, so sassy! I loved that little guy!) 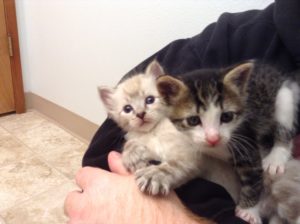 They stayed with us for about three weeks, with multiple rounds of medications and trips to the vet and fecal flotation tests. Just as they’d improve, they’d get hit with another bout of diarrhea. On and on this went. Still, it didn’t get their spirits (or their appetites!) down. They kept steadily improving and gaining weight despite the parasite trying to make them miserable.

Soon they were rid of their infection and ready for adoption! They went in for tests at the veterinary hospital and were immediately adopted. And none too soon, either, because just as they left BeeBee’s House, another call came in….