BeeBee’s House Kitten Rescue was begun by the James Household (Dina and her husband Rob) in September of 2017, inspired by Hannah Shaw of kittenlady.org. Hannah’s videos and advocacy encouraged us to volunteer with our local animal shelter, taking care of kittens and cats in need of forever homes.

We specialize in neonatal (newborn/bottlefed/orphaned) kittens, pregnant cats, and special needs kittens that would otherwise be euthanized without someone to care for them until they are old/well enough to be adopted into forever homes. We are experienced caregivers (both human and animal), having hand-raised two of our own cats. We have had several special needs animals for over fifteen years and are accustomed to the time and dedication it takes to ensure they not only survive, but thrive to the best of their ability.

BeeBee’s House is named after just such a cat. 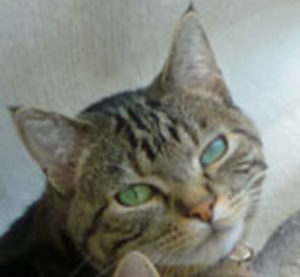 Her name was Beebee (as in B.B. for Brokeback – not the mountain; her congenital condition). We called her Bee for short. She was born with kyphosis (“hunchback” in the non-Fancy Medical Speak) as well as some fused vertebrae in her lower spine. What this meant for her is that she was partially paralyzed from the middle of her back. She had trouble controlling her rear legs, and had some unknown (and unknowable without lots of invasive tests and surgeries which were deemed unnecessary) internal damage. She had trouble going to the litter box and issues with her bathrooming, but was otherwise healthy.

She was a shelter kitten, and by law they cannot adopt out an animal they know to have a life-threatening or unstable condition.

Basically, we were her only hope for any kind of life at all. She was deemed “unadoptable” and slated for euthanasia.

The vet called us and asked if we would have a look at her. We didn’t hesitate. It was just after Thanksgiving 2010. We jumped in the car. They brought her in, we took one look at how she moved (very well, thank you, despite her little wobble and stiff-legged gait) and nodded to the tech. We would take her home as soon as she was ready to go. We paid the adoption fee and they kept her for shots and her spay, and I got a little broken kitten for my birthday (December 2). She was about 5 months old. 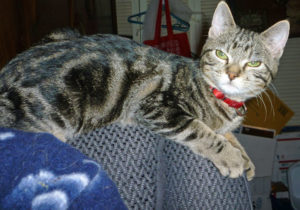 Fast forward six years. For the past several weeks, Bee hadn’t been herself. She began having more bad days than usual, and you could see she was in pain if you knew her well enough. She had medication, but it stopped helping with her pain, and did more harm than good in regard to her other issues. For weeks we went back and forth to the vet, trying to find some way to get ahead of the avalanche heading for our girl. After much consulting with many medical authorities, friends, and family, the decision was made. We had to help her in the only way we had left.

On November 4, 2016, we held her tight as we said goodbye to our special girl. She brought so much joy to our lives and we miss her very much. 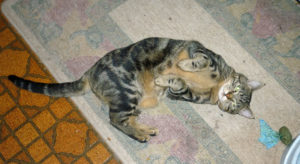 About six months later, I found Hannah’s videos. I watched them all and consulted with the husband. We are both disabled and didn’t think we could manage to look after our household pets and fosters/neonates. Hannah changed our minds, and soon I was signed up with the shelter to become a foster parent for kittens.

The first litter I picked up at the shelter, I said “Here we go to Bee’s house!”

And that’s how BeeBee’s House Kitten Rescue got its name.