This page is dedicated to those foster kittens who have crossed the Rainbow Bridge. Fostering saves lives, but sometimes those lives are too short despite the very best efforts everyone involved can make. There are many reasons a foster kitten passes on, and this page is here to remember those who came to BeeBee’s House, and remind us why we do what we do.

This was Vax’ildan. He was a beautiful flame-point Siamese; one of three brothers of Critter Litter #1. He was the tiniest of the three, but that didn’t slow him down. As his brothers gained weight and grew, Vax didn’t. As they got older, it was harder and harder for Vax to go potty. After some examinations and tests, it was determined that little Vax had a congenital defect of his digestive system known as megacolon. Though more common in older cats, they can be born with it. The diagnosis was grim, and it was determined that surgery to correct his issue wasn’t an option for him. He would not survive the procedure at his age, and would not live to an age where it was feasible. There was only one way for us to help him.

Vax’ildan was the first foster BeeBee’s House lost. Even though he wasn’t “ours” officially (as an owner), the shelter was kind enough to allow us to keep his ashes, and the veterinarian made us a print of his little paw, which Dina had tattooed over her heart as a reminder of his spirit and the mission of BeeBee’s House. We will always remember little Vax’ildan. He was funny and playful and loving. There will never be another one like him. We love you, Vax’ildan. 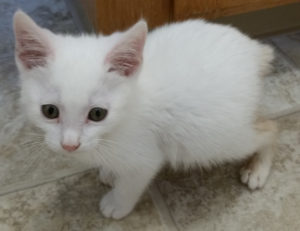 This was Andi. She was a flame-point Siamese; one of the Goonies Litter. She was born with only half a tail. We called her “little frog cat” because her back end was squat and she hopped like a frog on bowed back legs longer than her front ones were. Though clearly a special needs kitten, she ate well and played with her three brothers – the only girl of the lot. After an examination, she was sent back to us with some meds and instructions. Within a day, it was apparent that there was more going on than suspected. Back to the vet she went, and more tests were done. It was determined that Andi had a similar condition to Vax’ildan’s – megacolon, but also a severe spinal deformity that may have been the cause instead of just a congenital case. (As both she and Vax were flame-point Siamese cats, and both had brothers with similar coloring, it is suspected that they were somehow related, as the timing of their births would be the gestation period for the same mother to have another litter.)

Andi’s deformity was too severe to be corrected, and she was too young to survive without surgery. She is a testament to the importance of spaying and neutering your pets. Hers was unnecessary suffering, and her passing will not go unrecognized. She had the most beautiful purr and loved her cuddles and scratches. We love you, Andi. 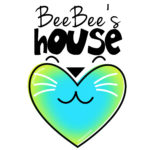 Amelia was supposed to come to BeeBee’s House along with her brothers in the Air Crew (Wilbur and Orville), but she never recovered enough from her illness (coccidia) to join them. We don’t even have a picture of her, but I’m told she was a beautiful fluffy white kitten like her brother Wilbur. Despite their best efforts, she passed away at the vet clinic after seven days of intensive care. We didn’t get to know you, Amelia, but you had a name, and you were loved by those who cared for you while you were here. 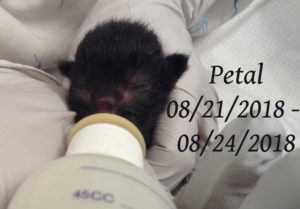 This was Petal. She was a little black kitten; one of the Wildflower Posse. Petal was the first kitten we ever lost to Fading Kitten Syndrome. I sat with her for eight hours as she fought her losing battle, and kept her as comfortable as I could while she passed. She was only three days old. Fading Kitten Syndrome is fast and lethal, and damned near impossible to get ahead of even if you know how to cope with it. Petal was the most difficult loss we had endured here at BeeBee’s House, and we still miss her. I told the vet about her the following morning, and was assured I did everything possible. (They told me that even if I’d have gotten her to them [they were closed and the nearest emergency vet is two hours away], there wasn’t much more they could do for her than I did.) The shelter was kind enough to allow me to keep her ashes. She rests on the Memorial Shelf with Vax’ildan. We love you, Petal. 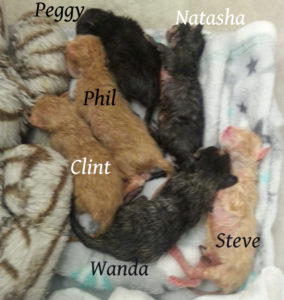 BeeBee’s House got an emergency call about a litter of six newborn kittens abandoned by their mother in a rural home. The homeowner did the best she could for them through the night, then called the shelter the next day for help. The shelter called me, and I picked them up at less than 24 hours old. There were three orange boys, a tuxedo girl, a calico girl, and a black tabby with white cheeks girl. BeeBee’s House has a policy of not naming kittens until they’ve passed the crucial 48 hour mark, which all of them did. We named them all after Marvel characters. After 72 hours, the black tabby kitten we called Natasha started showing symptoms of Fading Kitten Syndrome. We managed to get her to the vet the moment they opened the following morning, and they did their best for the next eight hours, but she was unable to recover. She was three days old.

The rest of the litter continued developing normally, except four days later one of the orange boys stopped putting on weight despite having a good appetite. 24 hours later, I sat with little Clint as he began to fade just like his sister Natasha had done earlier that week. He was only seven days old; he hadn’t even opened his eyes.

We know Fading Kitten Syndrome is possible to beat when combated early, but despite our best efforts (even with the help of a veterinarian), it’s usually not enough. We did our very best to help Clint, and all we were able to do was keep him comfortable as he passed. We are aware of the fact that two losses of such young kittens out of a potential six is a fantastic outcome, but it doesn’t make it better. To lose Clint right after Natasha was a blow to our confidence in being able to foster neonates, but we had four others depending on us to care for them, and they grew up healthy and happy. We’re not going to stop trying to save the lives of the most vulnerable just because we don’t always win. That’s what this page is for – to remind us of what we’re fighting for. We love you, Natasha and Clint.