It’s been a very long year for BeeBee’s House. When we did our year-end round-up, we realized we’ve had non-stop fosters since April. We took a short break in September to go out of town for a planned absence, but even that was cut short on our return by three days with an emergency call. (Hey, emergencies are just that – emergencies!)

We did some counting and calculating, and discovered that since our first litter of fosters in October 2017, we’ve adopted out 30 kittens! We’ve had our share of losses, but we take a modicum of comfort in that overall our mortality rate is lower than the national average when it comes to fostering kittens. Some kittens fade even with their mother present. We do what we can, and sometimes even our best isn’t enough.

Our wins have far outweighed our losses, however. We have fostered a total of 35 kittens and have adopted out 30 of them. That’s a 14% mortality rate.

From Maggie’s Fund, another foster page on the web:

The veterinary literature reports intimidating mortality rates for orphaned kittens up to 12 weeks of age, ranging from 15% to 40%. Deaths are rarely exhaustively investigated, but may be attributed to birth defects, trauma, infections and nutritional problems. Non-infectious causes are more common in the first few weeks of life, while infectious causes are more common at 3 to 4 weeks of age when the maternally derived antibodies from colostrum start to wane.

The biggest determinants of natural kitten loss are low birth weight and poor growth rates. For dedicated caregivers, it can be heartbreaking and frustrating to lose kittens, but it is worth remembering that up to 60% of low-birth-weight kittens under natural conditions will fail to survive.

This makes me extra-proud of Steve, one of the Marvels in our last foster group of 2018. Steve was the smallest of the Marvels, weighing just 78g at a day old. We lost two of his siblings, Clint and Natasha, and neither of them were next in line for low birth weight. Steve grew up to be the second largest of the group, at one point being the biggest until his brother Phil beat him out by 20g. Steve was named (aptly!) after Captain Steve Rogers (Captain America), who began life as a scrawny little guy and became a big healthy guy after a dose of super-serum. Our Steve grew into a hero, too. 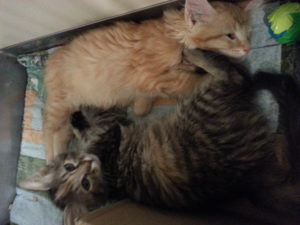 Steve is the big orange fluffball, napping with bestie Wanda

BeeBee’s House is on holiday hiatus through February. We desperately need a break, as we’ve had non-stop fosters since April 2018 — sometimes two litters at a time! Our largest litter by far was the Marvels, and we had them the longest amount of time (11 weeks due to the holiday in November). We are seriously overdue for a break, and are enjoying the time with each other and our household cats. We ended up adopting one of the 30 ourselves (which still counts as an adoption!), and she just turned six months old last week. She’s a nightmare and we love her. She gets along well with her new family, and absolutely loves her big sister. (They’re curled up together on the bed behind me as I type this.)

Thank you to all the supporters and donations and general help to everyone who has seen us through this year. We couldn’t do what we do without you, and are very grateful to you all.